DZ BANK Group reports a profit before taxes of € 1.81 billion

In 2017, the DZ BANK Group again delivered a good operating performance and generated a profit before taxes of € 1.81 billion (2016: € 2.2 billion). The results were underpinned by strong customer business along with very good results in most group companies. The annual financial statements factor in significantly increased allowances for losses on loans and advances in respect of DVB Bank’s maritime portfolio. Nevertheless, the DZ BANK Group’s profit before taxes was within the long-term target range of € 1.5 billion to € 2 billion.

“The results that we have achieved are a sign of the stability and earnings power of our broadly positioned financial services group. We are especially pleased to have further expanded our customer business despite the fierce competition in many areas. At the same time, we completed the post-merger integration activities in December 2017, which was earlier than planned. Overall, we were therefore successful in what proved to be a challenging year,” says Wolfgang Kirsch, Chief Executive Officer of DZ BANK AG.

The DZ BANK Group’s capital situation remains sound. On a fully-loaded CRR basis, the DZ BANK Group’s common equity Tier 1 capital ratio stood at 13.9 percent, up by 0.9 percentage points on June 30, 2017. The decrease compared with the end of the previous year (December 31, 2016: 14.5 percent) was primarily due to changes to the regulatory treatment of investments in insurance companies in the calculation of capital. At the end of 2017, the leverage ratio was 4.4 percent (December 31, 2016: 4.1 percent). Rating agencies Standard & Poor’s and Moody’s confirmed their credit ratings for the cooperative financial network of AA- (S&P) and for the DZ BANK Group of Aa3 (Moody’s). The DZ BANK Group is thus one of the best-rated banking groups in Europe.

Please note that the annual financial statements reflect, for the first time, the performance of the merged bank for the entire year. The figures therefore only have limited comparability with the prior-year values.

Gains and losses on trading activities came to a net gain of € 506 million (2016: net gain of € 780 million). The strong operating performance in DZ BANK AG’s capital markets business was offset by negative effects arising from the valuation of own issues.

Gains and losses on investment, which amounted to a net gain of € 10 million, were not affected by any one-off effects in the reporting year, whereas there had been a net gain of € 127 million in the previous year due to a positive non-recurring item resulting from the sale of shares in VISA Europe.

Other gains and losses on valuation of financial instruments amounted to a net gain of € 289 million (2016: € 51 million) and were significantly influenced by positive valuation effects arising on the wind-down portfolio at DG HYP.

Administrative expenses in the DZ BANK Group totaled € 3.87 billion (2016: € 3.6 billion). The increase was due, above all, to the inclusion of the WGZ BANK Group from mid-2016 and an extensive portfolio of digitalization, IT, and regulatory projects.

Net income from the business combination with WGZ BANK amounted to a net expense of € 91 million (2016: net income of € 256 million) and included budgeted integration and migration expenses.

Results of the DZ BANK Group

DZ BANK AG again achieved good results and posted a profit before taxes of € 752 million thanks to its stable operating performance. Despite a market environment characterized by fierce competition and considerable pressure on margins, the bank increased the lending volume in corporate banking by 2 percent to € 49.7 billion. The volume of lending in business operated jointly with the cooperative banks rose by 8 percent to € 13.2 billion. Good progress was made with attracting new customers and stepping up business with existing customers. DZ BANK registered brisk demand among large and medium-sized customers for support with international expansion, particularly those looking to do business in Asia. In its capital markets business for institutional clients, DZ BANK was able to increase its market share in many business segments. Business involving new bond issues remained at the positive level seen in 2016, while there was substantial growth in the volume of promissory note and sustainability bond issues. The bank’s products met with keen interest from customers, both in its business with derivatives for interest rate and currency hedging and in its securitization business. In the capital markets business for retail customers, sales of structured products at DZ BANK rose sharply to € 6.1 billion (2016: € 4.4 billion); the bank remains the clear market leader with a market share of 16.6 percent. DZ BANK maintained its strong market position in the Transaction Banking business line and, in particular, increased the volume of assets under custody in its custodian bank business to a record high of € 209 billion (2016: € 184 billion).

Bausparkasse Schwäbisch Hall (BSH) reported a good profit before taxes of € 334 million in 2017, compared with a figure of € 158 million in 2016 that had been influenced by one-off items. Its operating performance was stable. While there was a slight decline in new home savings business to € 28 billion (2016: € 29.2 billion), new home finance business grew by 5 percent to € 14.6 billion. With a market share of 30.9 percent, BSH remains the undisputed market leader.

The profit before taxes of R+V Versicherung rose by 16.7 percent to a record of € 795 million. Premiums earned advanced from € 14.7 billion to € 15.2 billion, with all business segments seeing premium growth. Gains and losses on investments held by insurance companies remained at a very good level.

Union Investment’s profit before taxes climbed to € 610 million (2016: € 468 million), which was again a record sum. The main reason for this growth was the increase in volume-related income on the back of a rise in assets under management to € 323.9 billion as at December 31, 2017 (2016: € 292.3 billion). This rise was driven primarily by the sustained high level of net inflows, with the retail customer segment, in particular, seeing a further increase in net inflows.

DG HYP posted a profit before taxes of € 504 million (2016: € 237 million). The increase was mainly attributable to positive effects arising from the valuation of government bonds in the wind-down portfolio. Core business also performed very well. In particular, the volume of new joint credit business with the cooperative banks increased to € 3.6 billion (2016: € 3.2 billion). Although the volume of new commercial real estate finance business remained encouraging at € 6.4 billion, it did decline due to DG HYP continuing to pursue a conservative approach (2016: € 7.4 billion).

WL BANK, which was included in the financial reporting for the whole year for the first time, reported a profit before taxes of € 133 million. New business remained at a good level in all core business segments, causing the overall volume of real estate finance to advance to € 22 billion (2016: € 20.1 billion).

TeamBank achieved a profit before taxes of € 148 million, which was slightly higher than the prior-year figure of € 143 million. In a challenging competitive environment, TeamBank increased its volume of new easyCredit business from € 2.41 billion to € 2.95 billion. The number of customers rose from 784,000 to 833,000.

DZ PRIVATBANK’s profit before taxes improved to € 20 million (2016: € 3 million). The prior-year figure had been affected by negative one-off items. Despite very challenging market conditions, DZ PRIVATBANK delivered a stable operating performance. The volume of assets under management advanced from € 16.9 billion to € 17.3 billion. The volume of assets under custody increased to € 108.8 billion 2016: € 100 billion).

VR LEASING’s results were affected by provisions for the transformation of the company, resulting in a loss before taxes of € 17 million (2016: profit before taxes of € 7 million). The company’s operating performance was encouraging and there was buoyant customer demand, particularly in online business. Going forward, VR LEASING will focus on being a digital provider of leasing, hire purchase, and loans for the self-employed and small businesses.

DVB Bank registered a loss before taxes of € 774 million (2016: - € 278 million). This figure factors in the significantly higher allowances for losses on loans and advances in respect of the maritime portfolio on the back of a further increase in overcapacity in the market. New business was scaled back. Following the implementation of an action plan to restore stability, all the strategic options for DVB Bank are currently being examined.

The economic conditions for 2018 are positive overall. The economists at DZ BANK Research anticipate that the global economy will continue to pick up pace this year and predict that Germany’s economic growth will again be at 2.2 percent. At the same time, the global economy remains susceptible to setbacks, for example due to geopolitical risks. The continuation of expansionary monetary policy is acting as a stabilizing force for the economy – while squeezing banks’ income.

“The start of 2018 has been satisfactory for us. We are continuing to see high demand from our customers. Given the challenging market and interest rate environment, we believe a profit before taxes at the lower end of the long-term target range of € 1.5 billion to € 2 billion is realistic for 2018 as a whole,” says Wolfgang Kirsch. Alongside the operating business, good progress is being made on structural work. This includes the merger of DG HYP and WL BANK to create DZ HYP, which will be the largest Pfandbrief bank in Germany.

Looking to the future, the DZ BANK Group is pursuing a clear strategy of growth in its core business. Wolfgang Kirsch: “In particular, we are strengthening corporate banking by making further investment in the direct business and in joint credit business. We are also adding digital products and services to our portfolio and tapping into new sources of income.” Another high priority for the DZ BANK Group is increased cost efficiency, which it is achieving by digitalizing further processes and streamlining workflows. Following the completion of the integration, there is also a greater focus on leveraging synergies.“ The DZ BANK Group has the foundations in place on which to continue growing profitably and for the benefit of our organization, and we are working to achieve this,” says Kirsch. 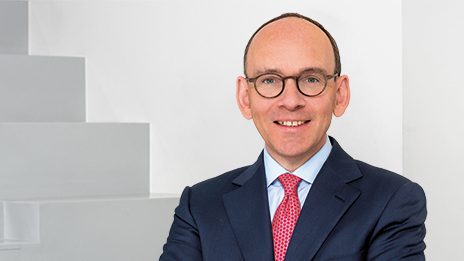